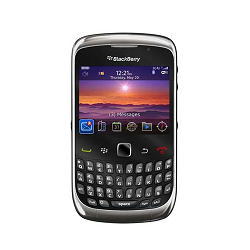 Unlocking Blackberry 9300 Curve 3G by code is the easiest and fastest way to make your device network free. It doesn't interfere in your system or change it in any way so even after using our code, you don't loose your warranty. In order to receive a network unlock code for your Blackberry 9300 Curve 3G you need to provide IMEI number (15 digits unique number). It can be found by dialing *#06# as a phone number, as well as by checking in the phone settings of your device.

Tired of using the same network on your Blackberry 9300 Curve 3G. We have a great solution just for you.
Thanks to our network unlocking service you can unlock any Blackberry model.
The service doesn't require exact network or country, because it supports all of them.

There are two ways of generating an unlock code for Blackberry 9300 Curve 3G:

Instruction for MEP application:
1. Connect your Blackberry 9300 Curve 3G to your pc by USB cable
2. Install the newest BlackBerry drivers (new drivers may be already installed on your PC)
3. Start the app and press "READ" button. The MEP number will appear on the screen.

Second one by using PRD number.

PRD number is a special sequence written on the sticker under the battery of your Blackberry 9300 Curve 3G.
It might look like this PRD-12345-123

For unlock Blackberry 9300 Curve 3G following options are available. If you don't know which option use for unlock your phone, please contact us. We will help you choose the right product for your phone.

Excellent, always a quick and reliable service, Thank you.

Excellent, quick and easy, thank you.

Every thinks are Ok A+++ Customer Service

The service was super. Waited for an answer on the site for a while, finally checked the e-mail, and there it was. Typed in the number and my Blackberry Curve 9300 was unlocked. Thank you so much

Yes, quickly sent email with code and it worked perfectly. Thanks

Unlocking BlackBerry 9300 Curve from Koodo Mobil Thank you sim-unlock.net for your professional work and responsiveness , code which you sended to working great no one problem Im just happy and was pleasure working with you ,thanks Tomas